“As the rain and the snow come down from heaven, and do not return to it without watering the earth and making it bud and flourish, so that it yields seed for the sower and bread for the eater, so is my word that goes out from my mouth: It will not return to me empty, but will accomplish what I desire and achieve the purpose for which I sent it.” 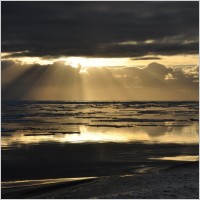 Lucifer. Who is he? Is he reall or just a people's imagination?

Satan is real. He rules over all the world and is deceiving many. He is not an anti - god as some may think. Satan is just a created spirit being as all the other angels in heaven, and humans on earth. Before God created human beings, he - Lucifer/ Satan, already was created. He was one of the most beautiful angels in heaven, and as all of the other angels (and humans), he was to serve God.

And just because he was so beautifully created, and had great influence, and he was of tremendous intelligence, he become proud; iniquity was found in his heart and God cast him out of heaven. (Though he had access to God now and then, but it is denied for him now since Jesus rose from the dead). Along with him Satan took some angels who listened his deceiving lies and refused to serve God. In the contrary to us, angels have no possibility to repent and return to God, because they see the goodness of God daily and see God face to face.

Today those fallen angels (Revelation 12:3-4 ) who are cast out of heaven, we call demons or evil spirits. Satan seduced and deceived them the same way he deceived Adam and Eve - "you will be as God." Genesis 3:5.

From the moment God, in Genesis 3:15, pronounced the curse on him, Satan did war against Christ since, and when Jesus was put on the cross, I think it was his greatest moment of joy ever (evil joy), for he thought that he has won and finally killed the Son of God who was to come to crush his head. Thanks and praise be to God, it last for him only for three days. And his head is chrushed by Christ. Now he is deadly wounded, and continue wage war against the 'seed of women,' who are all those who follow Christ.

(Lucifer's war against His Creator is fully revealed in the book of Revelation 12.)

All what God created, was very good (Genesis 1:31; 1 Timothy 4:4), but when Satan took over this world, he instantly developed his own system which stands till now. For this reason the world is messed up and it is getting even worse for Satan is filled with fury, because he knows that his time is short. (Revelation 12:12).

Nonetheless, he has no power in himself but world, not knowing the Truth, allow him to be a ruler and so he is called "god of this world" (2 Corinthians 4:4); for that reason he has great, tremendous influence on all world's industries and life's areas what ever there may be. All religious systems and the government are polluted by him.

Satan tempted Adam and Eve with the most destructive way there can be - "you will be like God; or "you will God." He led them in revolt against God.
People want and do the same what Satan wanted - power, authority and control. He did not wanted to be submissive to God and so also all the world now by living under his power, authority and control, follow Satan's desires and are suffering.

Proud, willingness to exalt oneself is the greatest fall of all people and nations of all times, and will be so till the new earth and new heaven will be created. Rebellion against God's established rules in the government, family, marriage, between children and parents, and all the other life's areas is what destroys people and nations, lead to slow but definite fall. Adam's and Eve's thinking (their Sin) is transferred to us - I will not obey Him, I will do what I want, I can do it on my own, I can be God myself for myself, I do not need Him, is what makes the world as it is.

In the Bible about Satan we read - "You were anointed as a guardian cherub, for so I ordained you. You were on the holy mount of God; you walked among the fiery stones. You were blameless in your ways from the day you were created till wickedness was found in you" (Ezekiel 28:12-19).

In Isaiah 14:12-14 we can read - "How you have fallen from heaven, morning star, son of the dawn! You have been cast down to the earth, you who once laid low the nations! You said in your heart, "I will ascend to the heavens; I will raise my throne above the stars of God; I will sit enthroned on the mount of assembly, on the utmost heights of Mount Zaphon. I will ascend above the tops of the clouds; I will make myself like the Most High."

See how many "I will" he pronounced deciding in his heart to be like God and rule like Him over all the creation which is created by God, the Christ. John 1:3.

Till the death of Christ, he still had access to the heavens and He could speak to God. (Job 1:6; Luke 22:31). After Christ's (the Messiah) resurrection his access to God is denied, (Revelation 12:10), he is casted out of heaven (Luke 10:18; Revelation 12:9) but continue to rule over all the earth, over those who are not under God's authority, but under his.

Satan himself said to Jesus that all the earth is given to him (by Adam) and Jesus did not raise dispute about it. (Luke 4:6). Jesus acknowledged that all world is under the power of the evil one (1 John 5:19).

All people either live under God's authority or Satan's. It is not possible for 99.9 % to be with God and 1% with the devil and vice versa. We can choose one or another, but never both in the same time. But it does not mean that he is not able to deceive even elect, those who are with Christ. He is able, if/ when we do not know, or hold not to the Truth.

How does he do it? By sending out his demons and convicting people about his lies; by working through our minds, by controlling our thoughts, feelings, hopes and actions.

Satan who rules over all the world are able to convict people of impossible just to keep them far away from the Truth. Under his leading the sorcerers, miracle-workers, magicians, predictors and the rest, who "with the Word of God" in their hands, are able to tell people many things which in no way can be know.
Satan with his demons work beyond imagination through the churches and seemingly good godly people, and especially through the pastors.
Who knows the Scripture so good as Satan? No one.

There are two kingdoms - one of God and the other of Satan.

There are two worlds - visible and invisible. The mostly we reject the invisible because of our ignorance, nevertheless we believe in Satan's miracles. We are suspicious and believe in his lies rejecting the Truth about which God said "know the truth" in order to be not deceived. I can say only this - our invisible enemy is doing and will do all possible and impossible just to keep people away from the Truth.

It is really can be hard to get along with life living under his authority, but those who are with God and under His authority I say, rejoice in your Redeemer and Saviour, for He has won the victory over Satan, the prince of this world. (John 12:31; John 14:30). God is sovereign, and although Satan can come (and he definitely is doing so) to the children of God and accuse them, he has no power over them anymore.

That is why we must to learn the Truth, we must be aware of Satan's schemes (2 Corinthians 2:11). We must come to the knowledge of Truth in spite of for centuries told lies about God, Christ, Gospel and Satan.

And the world who lives under Satan's authority, his power and dominion, hates those who are with the Christ. John 15:18; Matthew 10:22.
But you who are with Christ stand firm, and check out every teaching, especially those of religion.

And finally, do not be afraid of him. Although he can put many stumbling blocks in your walk with Jesus, and turn your life upside down, be strong and be courageous. For God will never let the righteous fall. God will never let Satan to destroy neither your life nor those you love.
Sift any thought what comes into your mind. Do demolish arguments and every pretension that sets itself up against the knowledge of God, and take captive every thought to make it obedient to Christ (2 Corinthians 10:5).

Recognize and acknowledge that our struggle is not against flesh and blood, but against the rulers, against the authorities, against the powers of this dark world and against the spiritual forces of evil in the heavenly realms (Ephesians 6:12).

We are warned in the Bible that "Satan himself masquerades as an angel of light" (2 Corinthians 11:14).

So, it is time to stand up for your own life and for that of around you, and stop believe in every spirit, every thought and every teaching what contradicts the Word of God.
If anyone of you is in Christ, let start to live as the children of God and not as those under the wrath (Ephesians 2:3).

Because now all those who are under the Christ and not under futile, sometimes even evil religious teachings and powers, are rescued from the dominion of darkness and brought into the kingdom of the Son, whom our God the Father loves.

Great darkness was covering all the earth and thick darkness was over the peoples, but the LORD raised upon all of us, His glory appeared over us (Isaiah 60:2) so that now we by persistence remaining in the Truth, can be delivered and rescued from any Satan's attack.

Submit yourselves, then, to God. Resist the devil, and he will flee from you, and do not give the devil a foothold. Put on the full armour of God, so that you can take your stand against the devil's schemes (James 4:7; Ephesians 4:27; Ephesians 6:11).

Some people credit with, or ascribe to Satan too much power, some believe not in his existence at all (which is very beneficial to him), but a healthy attitude toward him, or knowledge about him can be of great benefit to us, and deliverance of many worries of this life. So, do know his schemes and the God of peace will soon crush Satan under your feet. The grace of our Lord Jesus be with you. Romans 16:20.

Jesus now is the head over every power and authority, having disarmed the powers and authorities,

He made a public spectacle of them, triumphing over them by the cross.